On 13th & 14th September, the Scouts participated in a Regional Event called Operation Night Hawk, a patrol hiking competition designed to test night time navigation skills.  This was the first time Operation Night Hike has been run in Victoria.  The event was run by Lerderderg Region in the grounds of Eumeralla Scout Camp, near Anglesea.  Many troops from across the western suburbs of Melbourne were represented in the 33 patrols, totalling about 160 Scouts.  Weather was mild, as the sky was cloud-covered and there was no wind.  However, the full moon was obscured and as the Scouts found, the navigation maps were tricky!  Our patrol, lead by Henry, was the last scheduled starter at 8:10 pm and they did not return from the 12km navigation exercise until after 1 am.   We were encouraged by reports from Henry that everybody contributed their skills, the patrol stayed together, worked as a team and they only got ‘geographically embarassed’ once.   Imagine our surprise and delight to hear the results at the Final Parade the next morning – our 6th Melbourne patrol had won the inaugural Lerderderg Operation Night Hawk competition!!!   Congratulations to the patrol of Kenneth, Sofia, Nathan, Yo, Kai and Henry.  They can feel very proud of their team effort in representing 6th Melbourne so successfully.  Below photos are from the Final Parade. Click on an image to enlarge. 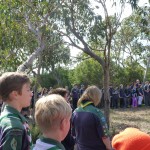 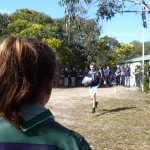 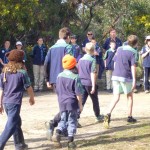 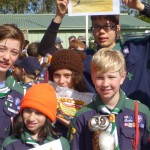 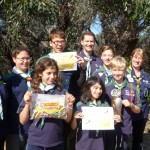